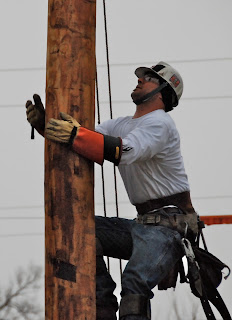 I had a great opportunity a couple of weeks ago to be a photographer at the annual Lineworkers Rodeo. Omaha Public Power District (OPPD) sponsored the event this year on behalf of the American Public Power Association (APPA).

When I first volunteered to do this as a member of the Omaha Camera Club, I didn’t think too much of it. I’d covered a million events like this as a reporter and in my public relations work. But this assignment turned out to be an unusual one.

It was dark, cold and rainy when we met at Carter Park in Carter Lake, IA, at 6:30 a.m. March 27. OPPD’s Jeff Hanson outlined our task for us:

So no multiple shots of the same person until you’re sure you’ve got it right. No bracketing for exposure. No trying different positions to get the perfect angle.

Oh. This breaks about every rule I have for doing a photo shoot. The challenge was on!

It was still raining an hour later when the opening ceremonies began, so we worked in pairs: one holding the umbrella while the other took pictures. My parter for the day was George Sinos, OCC member and OPPD employee. Our other partners were Sue Baxter and Brian Alspaugh.

Because it was rainy and dark, we were shooting at ISO 1600 to get a shutter speed of 1/200 at f 5.6. This meant photos would probably be grainy and noisy, and capturing fast action would be tricky.

I had to keep my camera under my coat to protect it from the rain, then wait until George was ready to hold the umbrella for me before I could shoot. We decided that because I had a longer zoom lens, I’d take the higher shots and he’d take the ground-level photos.

We got a break when the rain stopped at about 8:30 a.m. Then we were able to wander around the grounds and keep our cameras out. The lighting also improved, so we could shoot at higher shutter speeds and stop action better. 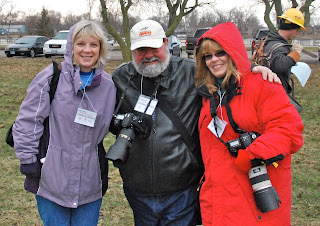 I stayed at the event until about 10 a.m. My neck and shoulders were screaming at me from all the looking up and constantly having my camera around my neck. I gave my memory card to George and headed home. My colleagues said later that their shoulders and arms were so worn out, their hands were shaking when they tried to eat their sandwiches at lunch.

The strangest part of the assignment hit me when I got home. There were no photos to download. No clicking through them to see what you’d caught. No cropping. No editing for best possible exposure.

Just waiting to get the DVD. Which I got the following Tuesday. I was finally able to edit and post photos this weekend. They are on my SmugMug gallery.

The best part of this event was seeing the dedication of all these power company lineworkers. They knew the only thing that would stop the competition would be lightning, because they work under adverse weather conditions all the time. They had practiced for months to refine their techniques and cut down their times. And their families traveled with them to cheer them on.

I salute OPPD for putting on a great event. Thanks also to George Sinos for giving us the opportunity to photograph it.