The buzz: Photos for beekeeping book 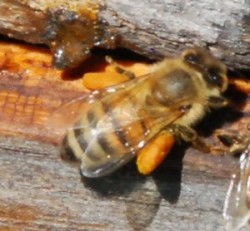 Three of my photographs have been selected to illustrate the first edition of The Practical Beekeeper: Beekeeping Naturally. The book is available in hardcover and paperback, and is now on sale at Amazon.com and Barnes and Noble.

The beekeeper is Michael Bush, who has gained an international reputation as an organic beekeeper. The book is simply a printed compilation of the information he’s posted over the years on the Bush Bees beekeeping Web site.

On July 1, I had the privilege of donning a bee suit and joining Michael at his farm south of Greenwood to photograph the bees. It wasn’t that hot — yet.

But as we worked and moved and temps climbed to near 100 degrees, things got warm inside that suit and mask. 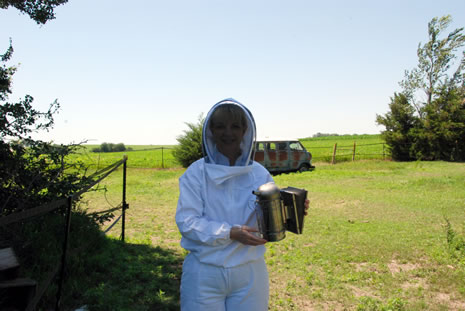 Theresa in her bee suit.

It was amazing to see, watch and photograph these bees in action. Every time Michael tried to show me a queen bee, she was soon surrounded by workers trying to protect her. I got to see baby bees emerging from their cells in the combs.

One of the coolest parts was seeing pollen-laden bees return to the hive. One of those photos was included in the book and is shown above. 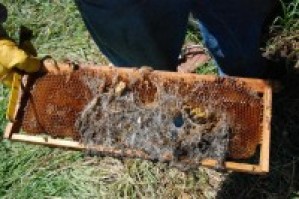 My other photos in the book show the entrance to a top bar hive, and the results of damage by wax moths when they invade a hive.

In addition to raising bees organically, Michael and his wife, Jenny, also breed friesian horses. Jenny is a former colleague of mine from the University of Nebraska Medical Center, where we did asthma research together. Jenny is past president of the Nebraska Society for Respiratory Care; I have maintained and updated their Web site for the past year.