When I tell people I’m a photographer, they are often surprised to find out I don’t do formal studio work such as portraits or weddings. Because of my background as a newspaper reporter, I prefer photojournalism such as shooting sports or special events.

A recent celebration for a friend reminded me once again why I enjoy event photography so much.

Walter Brooks worked with me in the Public Relations office at the University of Nebraska Medical center during the six years I was the campus webmaster. In addition to his many responsibilities as a media specialist, he also contributed many hours to the Omaha Star as a reporter and photographer. I remember more than a few deadline days helping him download pictures so he could get them sent to the Star on time.

For his 30+ years of service to the Omaha Star and the North Omaha community, Walter was honored April 20 with the Legacy Award from the Mildred D. Brown Memorial Study Center. Ms. Brown was the founder of the Omaha Star.

My UNMC colleagues bought a table of tickets for the event and invited me to attend. Late in the afternoon that day, I decided to bring my camera with me and take some photos for Walter. I was so glad I did!

From the welcoming reception to the scholarship recipients and renowned featured speaker, this was truly a gala event at the Omaha Hilton. I had plenty of interesting subjects to photograph and stories to tell.

Anyone who knows Walter and has spent time with him knows that Walter LOVES to talk, especially about history, movies and books. So when he promised the crowd that he would finish his speech before midnight, he wasn’t entirely kidding. But he gave a wonderful review of his work with the Star and what it meant to him during his career in public relations and community advocacy.

I also learned that night that Mildred Brown established a study program to get teens interested in pursuing journalism careers. I met Josh Jones, the scholarship recipient, who didn’t give up on his studies or love of sports after his father died in 2006.

Throughout the dinner with UNMC colleagues and the speeches during the program, I was stopping to snap photos: of my friends and me, Walter and his family, honorees, Omaha dignitaries. My goal was to document this very special evening for Walter and his family so they’d have a series of photos to help them remember the celebration that could be passed on to family and friends as well.

In the end, I ended up fulfilling another role: taking photos for the Omaha Star. I met Deb Shaw, the Star’s Circulation/Retail Coordinator, at the event. I gave her my card and told her that I would post my photos in my SmugMug gallery, and she could use whatever photos she wanted.

The following week, my UNMC colleagues emailed me to tell me that the Omaha Star had printed an entire page of my pictures from the event, and had given me a large credit at the top of the page. They also used three of my photos on the front page as well. I ran out that day to buy several copies of the paper for my portfolio. 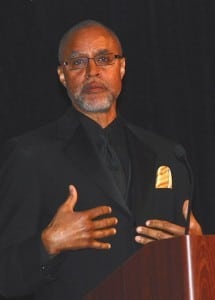 Event photography sometimes isn’t the most glamorous work; nor is it the easiest. You don’t always have the best lighting or backgrounds. You get only a few moments to shoot the most important photos. And you usually don’t have much time for editing before people are asking to see their pictures.

In spite of this, I love the challenge of capturing the memories and moments that will last a lifetime and will be passed on to future generations. In this case, these photos also have become part of the history of the Mildred Brown Study Center.

At the end of the evening, the UNMC group gathered for a drink after the ceremony so we could talk and reconnect. Walter thanked me for taking photos and said: “The best part about this is, I have done this for so many people for DECADES. And finally, someone was there tonight doing this for me.”

For a short while, I got to step into my friend’s shoes and give back to him what he had given to so many others over the years. Congratulations, Walter. It was a privilege and an honor to celebrate with you.

Photos from the event can be found in my SmugMug gallery.