Catena Creations once again managed the Halloween Candy Buy Back for Emergency Dental Care USA. For the third annual event, this year we partnered with Offutt Air Force Base to collect treats for two units stationed in southwest Asia. 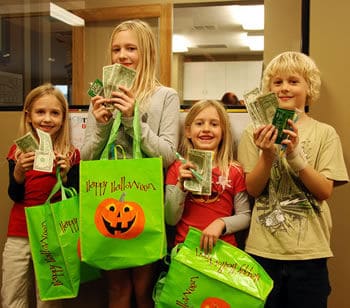 The partnership took the event’s success to new heights. We collected 177 pounds of candy on Nov. 1, the day of the event. But we were far from finished.

Staff at Gordmans retail stores heard about the buy back event, and collected nearly 75 pounds of candy in two days at their offices. This and other weekend contributions brought our final total to 280 pounds — more than double the previous record!

Publicity focused on letting the community know that treats were being sent directly to Offutt personnel. Catena Creations worked with Ryan Hansen in the 55th Wing Public Affairs Office. He secured permission from commanders of two groups to participate: 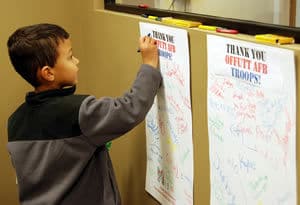 We publicized the event by sending out a press release to local media; posting on Facebook, Twitter, our blog and the Emergency Dental Care USA blog; and posting the press release on PR Web to reach a wider audience as well.

Signs were hung up in the Emergency Dental Care office at 84th and Center, and banners were hung outside the office as well. We also printed flyers to hand out in the office.

Offutt supported the event by posting it on their Facebook page, handing out additional flyers, and including it in a number of base e-mails and other communications.

The day of the event took on a new excitement. Two blank posters were hung on the wall, and everyone who brought candy was asked to sign both so we could send one to each unit. All the kids got new toothbrushes and had their photos taken.

WOWT Channel 6 came out to do a story about the buy back, which was shown on the 6 and 10 p.m. newscasts.

Lauren Harahill turned her coverage of the event into a class project for the news channel at the University of Nebraska at Omaha, where she’s a broadcasting major.

The opportunity to say “thank you” to the Offutt troops drew many of the participants. One mother said her teen wasn’t interested in selling her candy — until she found out the candy was going to Offutt personnel. Then she willingly packed up her treats and brought them in.

The buy back seems to be becoming a tradition — we had three families who were “three-peaters” and visited us for the third year in a row.

And as always, the kids had a variety of answers when we asked what they would buy with their money. Responses ranged from “toys” to “a Google Nexus 7 tablet.”

Thanks to Operation Gratitude, who shipped the candy to the troops. Thanks also to Mr. Hansen and the Offutt personnel who made the partnership so successful. It was an honor to work with you to support our local heroes.

Photos from the event can be found on SmugMug.