Halloween candy buy back a success 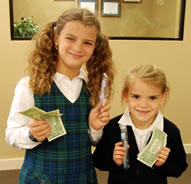 Thanks to all the kids and parents who came by Omaha Emergency Dental on Monday, Nov. 1 for the Halloween Candy buy back, sponsored by Michael Obeng, DDS. We paid out $95 and gave toothbrushes to kids who brought in their treats and sold them for $1 a pound.

But the fun wasn’t limited to the kids. Throughout the day, adults stopped by the office at 84th and Center streets to drop off their candy just so the troops could have more treats. That added another 36 pounds of candy, bringing the total to about 131 pounds.

All treats will be shipped to Operation Gratitude, which packages the candy with other items and sends care packages to soldiers overseas.

Aside from giving treats to the troops, kids and their parents had their reasons for participating in the buyback. One parent said her children are allergic to peanuts, so they never went trick-or-treating because they couldn’t eat the candy. But this year, they were thrilled to collect candy, knowing they could bring it in the next day and get some spending money for other treats.

Another mother said her daughter gained 11 pounds last year eating Halloween candy, and had to have her cholesterol checked before she went to kindergarten.

Most of the kids were saving their money to get something special. Their list of “someday” items included:

Photos from the event can be found in my gallery on SmugMug.

Catena Creations sent out a press release about a week before the event, which led to an interview iwth KFAB radio. Portions of the interview were used on KFAB’s sister stations as well. The event also was published in the Omaha World-Herald. The event was posted on Facebook pages for Omaha Emergency Dental, Vamonos Marketing and Catena Creations, as well as my personal Facebook page. It also was featured on the Omaha Emergency Dental Web site.

We also assisted Dr. Obeng with researching and planning the event. In addition to writing the press release and managing interviews, we designed flyers and banners;  and provided materials to Vamonos Marketing to post on the dentist’s website and Facebook page.